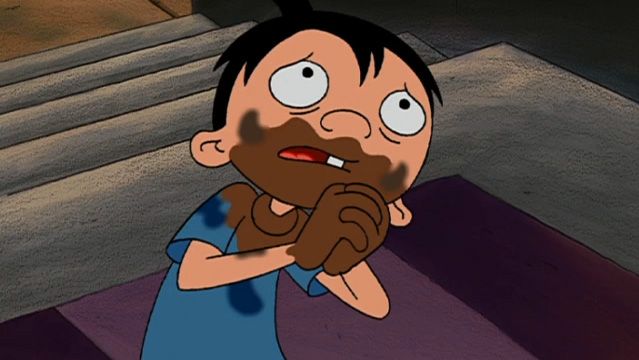 *Disclaimer: The following article on the Hey Arnold! episode “Chocolate Boy” deals with the theme and representation of addiction, specifically drug addiction. While this is certainly a topic that must not be shied away from, it is not something I have had to witness first hand or on a day to day basis in my own life. It is not my intention to appear insensitive nor ignorant of the issue at hand, a vital talking point in the contemporary sociocultural climate. Nevertheless, I apologize in advance for any potential and/or unintentional mishandling of the subject matter.*

As discussed in a previous article on this site, Hey Arnold! was one of the the original “Nicktoons” airing on Nickelodeon in the late 90s and early 00s, and was the most successful program on the network with regard to balance of content for younger children, older children, and adults. While some shows became beloved entertainment for young kids in the 90s and others were geared toward older children, Hey Arnold! struck a balance between charm, lessons and morals, and mature themes and storylines.

One particular episode that stands out with regard to heavy subject matter is the third episode of season 5, “Chocolate Boy.” Many episodes in the later seasons of Hey Arnold focused on the eponymous Arnold’s interactions with secondary and side characters in Hillwood, serving as a moral conscience and helping the city’s residents with their problems. Arnold taught Oskar Kokoshka to read, managed Mr. Green’s campaign to run for office, and helped classmate Harold recognize he was happy at his previous size and lose weight. But, his greatest challenge, according to his friends, would be to help Chocolate Boy “get off chocolate.”

“You can never get Chocolate Boy off chocolate,” Arnold’s friend Gerald explains (minute 12:06). His classmates concur, believing “It would be easier to push a two-thousand pound boulder up an icy mountain,” “Or teach a goldfish how to play a clarinet.” Nevertheless, in his desire to help everyone he can, Arnold decides to help Chocolate Boy to quit eating chocolate once and for all .

Unbeknownst to younger children, Chocolate Boy’s inability to stop eating chocolate is a kid-friendly portrayal of drug addiction, with Chocolate Boy physically unable to stop ingesting the substance. Though played for laughs in is earlier appearances, the Tyrone Biggums of the Hey Arnold! universe, this episode centers on the struggles of overcoming addiction for both the addict and their support network, the fits and starts, the breakthroughs and setbacks. Parallel to efforts to get clean in real life, Arnold makes Chocolate Boy clean out his room of any chocolate, while Chocolate Boy himself goes through the symptoms of withdrawal, shaking, fatigue, even licking ants in a delirious state due to their resemblance to chocolate. Despite the struggles, Chocolate Boy is able to stay away from chocolate for two weeks, prompting Arnold to declare him “a changed kid.”

But, little does Arnold know Chocolate Boy’s true motivations for wanting to get clean. Rather than looking to truly make a life change, Chocolate Boy manipulates Arnold’s good nature to win a bet with school bully Wolfgang, in which he gets ten pounds of chocolate for being clean for two weeks. Arnold walks away disheartened by the experience, while Chocolate Boy quickly consumes the entire bag of chocolate.

Eager for more chocolate despite Wolfgang calling him “pathetic,” Chocolate Boy dances for malted milk balls, becoming “a chocolate clown” much to the delight of the fifth grade bullies. He flees their derision and makes his way to a dumpster, again looking for more chocolate, before seeing himself in the mirror, experiencing a “moment of clarity.”

Reaching his lowest moment, Chocolate Boy once again approaches Arnold to help him get clean of chocolate, where Arnold expresses his doubt due to previously falling victim to manipulative addict behavior. Chocolate Boy sincerely pleads to Arnold, leading the latter to agree to help once again, paralleling the lack of linear progression all too common in attempting to beat  addiction. Arnold uses scare tactics, showing Chocolate Boy the physical detriments of eating too much chocolate, as well as trying to replace chocolate with carob and various vegetables, similar to weaning off of substances through smaller doses or nicotine patches. None of the aforementioned strategies work, making Arnold resort to hypnosis to get to the psychological root of Chocolate Boy’s addiction.

Arnold’s hypnotherapy leads to the revelation that Chocolate Boy consumes chocolate because he misses his nanny who raised him for much of his early childhood, she gave him chocolate and only wanted him to be happy. Arnold reminds Chocolate Boy that eating chocolate won’t bring the nanny back nor is his addictive behavior making him happy. Recognizing that he can not only be happy without chocolate, but that he will only be happy by eliminating his addiction, Chocolate Boy resolves to never eat chocolate, overcoming his obstacle and completing the character journey for the episode.

“Chocolate Boy” may likely have been the first depiction of drug addiction many children from the 90s and 00s saw on television, a reference point for understanding addictive behavior and leaving enough of an impact that I just spent a significant amount of time writing about a children’s cartoon (again). The episode shows the highs and lows of trying to beat addiction along with the psychological origins for dependence, in this show chocolate as opposed to drugs, alcohol, or other stimuli. Working with Arnold as a support system, Chocolate Boy is able to beat his habit, the episode serving as an effective demonstration of the struggles of addiction for a young audience.

But, like the episode “Rhonda Goes Broke,” the episode continues past the resolution of the central conflict. When Chocolate Boy thanks Arnold for his help, Arnold can’t help but notice that Chocolate Boy seems to really like radishes, one of the vegetables he tolerated when trying to gradually replace chocolate (minute 20:26). Arnold asks for the radishes, prompting Chocolate Boy to declare that he “needs them,” thus perpetuating addictive behavior despite the completion of the character arc mere seconds earlier. As with the botched message in “Rhonda Goes Broke,” the moral of “Chocolate Boy” is undone by a lame joke, undermining the entirety of the character’s journey.

“Chocolate Boy” represents both the very best and very worst of Hey Arnold! The episode tackles a very mature theme, that of addiction, and presents it to a young audience in an accessible and memorable manner. It demonstrates that the path to overcoming addiction is never a linear one, with setbacks all too common before finally achieving a breakthrough. Yet, in what seems to be a reoccurring problem with the series upon review, the end of the episode contradicts the broader narrative, with Chocolate Boy not truly beating his addiction despite the fact that the arc of the story naturally ends with the decision to completely give up chocolate. One could argue that this is darker commentary, that addiction is never truly overcome, but nothing in the progression of the story suggests that this was the intention of the writers. Instead, Chocolate Boy’s addiction to chocolate is substituted for a dependence on radishes, an unnecessary joke botching the narrative as well as the important lessons intended for impressionable children.